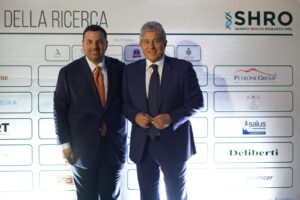 “If I have seen further it is by standing on the shoulders of Giants” – Sir Isaac Newton (in a letter to Robert Hooke, 1675)

“I am happy to import the American meritocratic model that inspired me into Italy and to invest in people to offer young researchers the opportunity to see their projects realized!” said Professor Antonio Giordano, M.D., Ph.D., Neapolitan Oncologist, Director of the Sbarro Institute in Philadelphia and President of Sbarro Health Research Organization (SHRO).

“It is with great enthusiasm that the Board of Directors and we have decided to give life to SHRO Italy, a new challenge that starts from the Southern part of Italy with the aim of making our know-how available to the Italian territory, further strengthening the links already in place with the major centers of excellence in national health care,” underlined Giancarlo Arra, Vice President of Sbarro Health Research Organization (SHRO).

In the context of the synergy between Southern Italy and the United States of America, the project aims to encourage American investors to invest in Naples, Campania, and the South.

Sbarro Health Research Organization (SHRO) also awarded four personalities for their commitment to their work during the Charity Gala Dinner event; they were:

1. Pierpaolo Sileri, Deputy Minister of Health, “for his commitment in this difficult pandemic era, for his passion for medicine as well as for politics.”

2. Federico Cafiero De Raho, Magistrate and former National Anti-Mafia Prosecutor, “for his strong morals and his predilection for the protection of freedom and justice.”

3. Michelino De Laurentiis, Chairman of Oncology Department, National Cancer Institute “Pascale” Naples, “for his confidence and strength with which he faces every battle with his patients.”

4. Antonio Giacomini, CEO of the Innovaway Group, “for his commitment to innovate digital transformation project.”

Here’s the news coverage by Il Mattino in Italian.